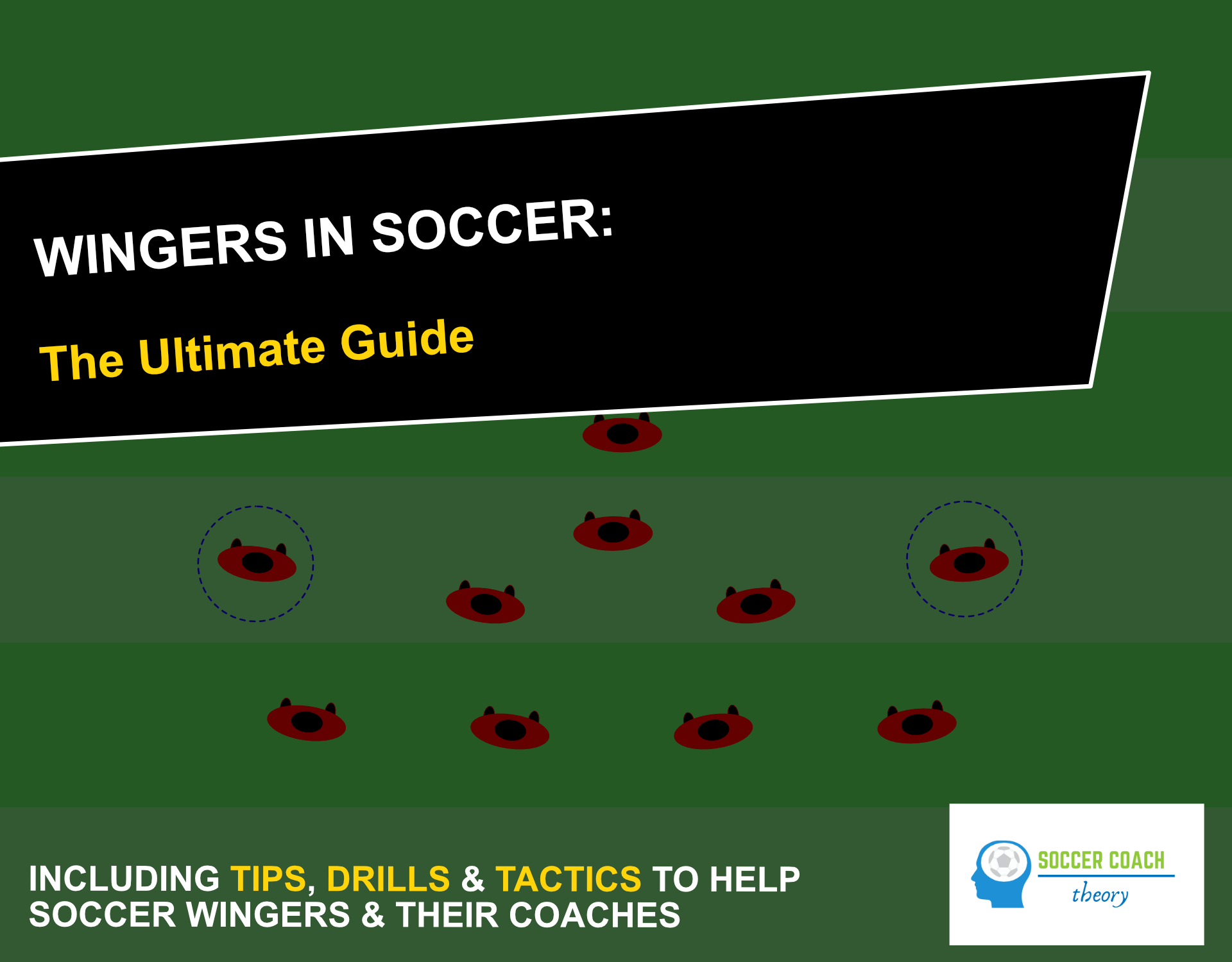 What is a winger in soccer?

Wingers are attacking midfield players who operate in wide positions or ‘on the wing’. Usually skilful and quick with good dribbling and crossing ability, wingers are often some of the most exciting players to watch.

What is the role of a winger in soccer?

The main role of a wing player is to create goal-scoring opportunities from wide positions. Wingers also usually weigh in with their fair share of goals. Although, in most teams, the main goal-scoring threat comes from the central striker(s).

In years gone by, wingers might have been afforded the luxury of just having to attack. However, in most teams, they now have to contribute to their team’s attacking and defensive efforts in equal measures.

Defensive responsibilities of a winger

If the opposition win possession of the ball whilst a winger is in an offensive position, it’s important that the winger or wide midfielders work back and take up a position behind the ball as quickly as possible. This really applies to all players (other than maybe central strikers who usually remain high as an attacking outlet if the ball is retrieved). However it’s particularly important that wingers or wide midfielders do this so not to leave space in wide positions for opponents to expose and outnumber the fullback.

For a team to be well-organised defensively, wingers should be tucked in narrow alongside their neighboring central midfielder. This makes it harder for the opposition to break the team down by reducing the space in central areas.

Attacking responsibilities of a winger in soccer

Creating and scoring goals are what every winger loves doing most. And this is how most wingers are going to evaluated on their performance.

There are many other ways wingers create chances for others though. As an example, it’s not uncommon for a left footed winger to play on the right wing (or visa versa). Rather than take defenders on and get crosses in from the dead ball line, these wingers tend to favor cutting infield with the ball. This opens up lots of options including shooting with their favored foot, slipping a through ball into a striker’s path or playing a wall pass with a striker or midfielder.

What formations include wingers?

Although now a little out of favor in the professional game, the classic 4-4-2 formation lent itself to fast wing play with many teams using two flying wingers to shape their attack. It should be said, however, that a 4-4-2 can be used with much narrower ‘wide midfielders’ as oppose to touchline-hugging wingers. This more compact shape is usually used by more defense-minded teams.

The 4-5-1 tends to be used for counter-attacking teams with a big target striker. In this system, the wingers are required to fulfill a disciplined defensive role until their team wins the ball, then they can use their pace to spring counterattacks or play off the central striker.

The 4-3-3 formation uses two wide strikers rather than traditional wingers, although there are many similarities to the role. 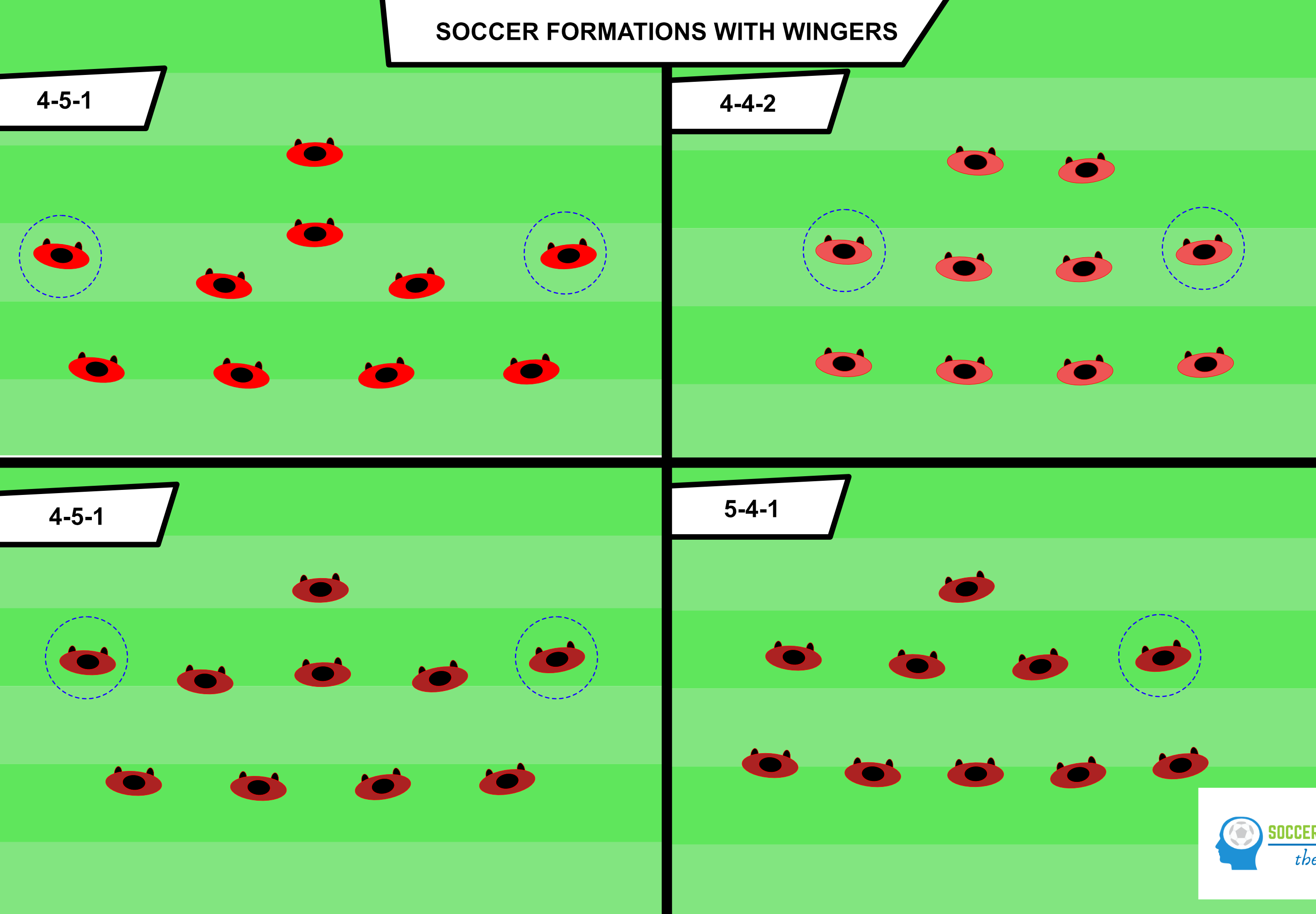 How is a winger different from a wide midfielder?

Differentiating wingers from wide midfielders can be slightly confusing because, on a tactics board, they appear to occupy the exact same position on the pitch. To further muddy the waters, some players may even be described as both by different people in the game.

The difference essentially boils down to the attributes the player in question has and their style of play. Described as players who ‘get chalk on their boots’ from playing so close to the touchline, wingers are known for being very attacking, quick and skillful and like to dribble past defenders whenever they get the chance. Such attack-minded wingers often play in front of defensively solid full backs to balance out the skillset on that side of the pitch.

Wide midfielders, on the other hand, tend to stay tucked in, closer to their central midfield counterparts. They usually have an entirely different skillset, often with less pace but greater passing ability, and maybe the ability to cross the ball well from deeper areas (think David Beckham or Kevin De Bruyne). Many wide midfielders are more defense minded and industrious, which complements attack-minded full backs who leave spaces behind them when they get forward.

The world of soccer has been blessed with many superbly talented wingers over the years. As mentioned earlier, wingers are a little less common is the modern era so, naturally, some of the players we’ve picked have now retired.

How has the role of the winger changed in soccer?

The rise in popularity of the 4-3-3 formation has seen winger style players occupy what would now be classed as wide striking positions. Players such as Raheem Sterling, Eden Hazard and Jadon Sancho would all likely have been used as wingers in 4-4-2 or 4-5-1 formations had they began their careers 20 years ago. But these formations are seldom used in the modern game.

Instead, these players, equipped with very much the same arsenal as traditional flying wingers, are deployed further forward as wide strikers, allowing them to weigh in with a greater amount of goals.

As already touched upon, more detailed defensive tactics and the reliance on collective tactical cohesion rather than a dependence on one or two ‘flair players’ to win games has meant wing  players have to fulfill defensive duties just like any other player. This means that even tricky attack-minded wing players must have a considerable work ethic and tactical understanding.

What skills & qualities should a winger have?

While there are different qualities and styles of play among the great wingers in the game, there are some essential attributes that they’re generally required to possess:

Wingers need some degree of speed to be able to beat a defender and run in behind defensive lines.

Carrying the ball at speed and negotiating their way past players is what wing play is all about!

Wingers don’t necessarily have to have fancy tricks and flicks in their locker, but they do need some level of skill. A lot of wingers use nimble clever footwork to bamboozle defenders rather than step overs and flip flaps.

For all their forays down the wing, dribbling past defenders, wingers won’t affect the game at all unless there is a good end product. This means quality crosses, cut backs or picking out team mates in crowded penalty areas.

Wingers are expected to weigh in with a decent amount of goals, so being an accomplished finisher is very useful.

An understanding of positioning specific to their team’s tactical strategy in and out of possession is a must in the modern game.

Tracking back, filling holes left by overlapping full backs and bursting forwards on counter attacks all require a solid work ethic and an appetite for the game.

How to play as a winger in soccer: top tips

Tips for coaching a winger in soccer

Here are a few tips for coaching wingers in soccer:

Errors a winger could make

Soccer drills for a winger