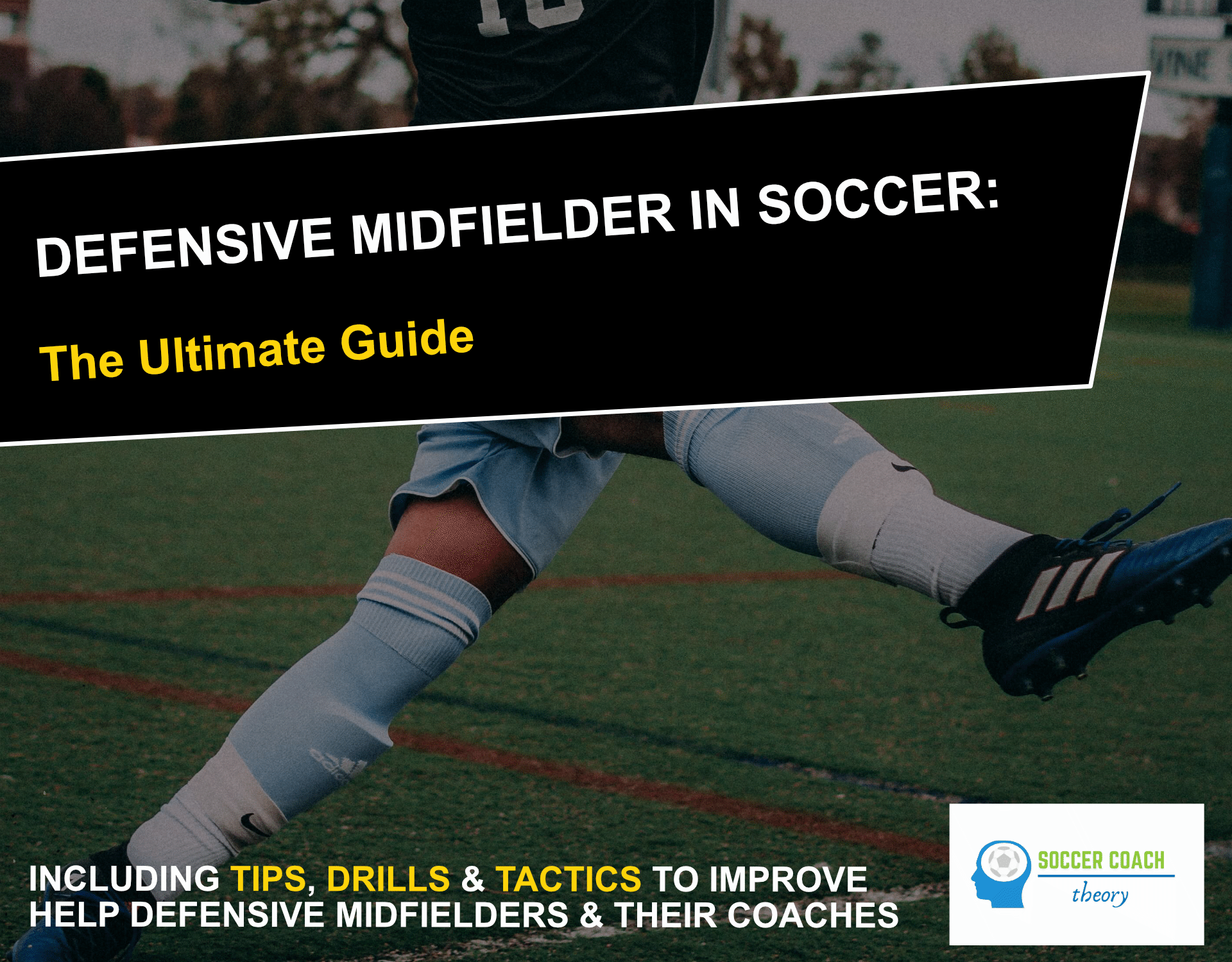 What is a defensive midfielder in soccer?

What is the role of a defensive midfielder? 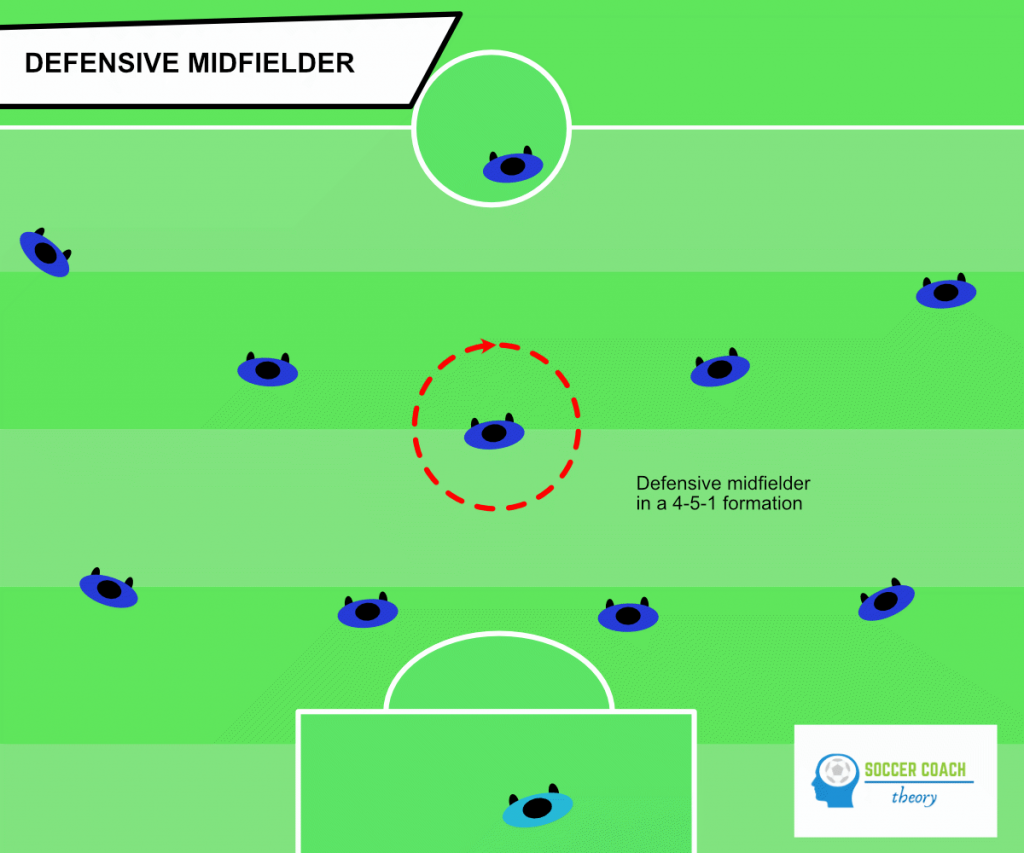 At the top level in the modern game, the defensive midfielder will also be responsible for initiating attacking moves, providing the link between defense and attack, usually taking the ball off the central defenders or goalkeeper.

Central midfield areas are often crowded, which means holding midfielders must be able to receive the ball in tight areas without losing possession. Technical requirements include good close control, the ability to use their body to protect the ball from opposition players and a good range of passing.

Defensive responsibilities of a defensive midfielder

There are two main defensive roles of the DM:

As a general rule, defensive midfielders should only operate between the width of the penalty area, only breaking this rule in desperate circumstances (such as when defending a counterattack whilst outnumbered).

Players have varying styles. Some have a very physical, combative style, making lots of tackles and winning second/lose balls; while others carry out the role through clever positioning and reading of the game, preventing forward passes or intercepting them without any physical contact.

In the case of the latter, simply filling a forward passing channel and forcing a sideways pass is an effective way of controlling what the opposition does with the ball. 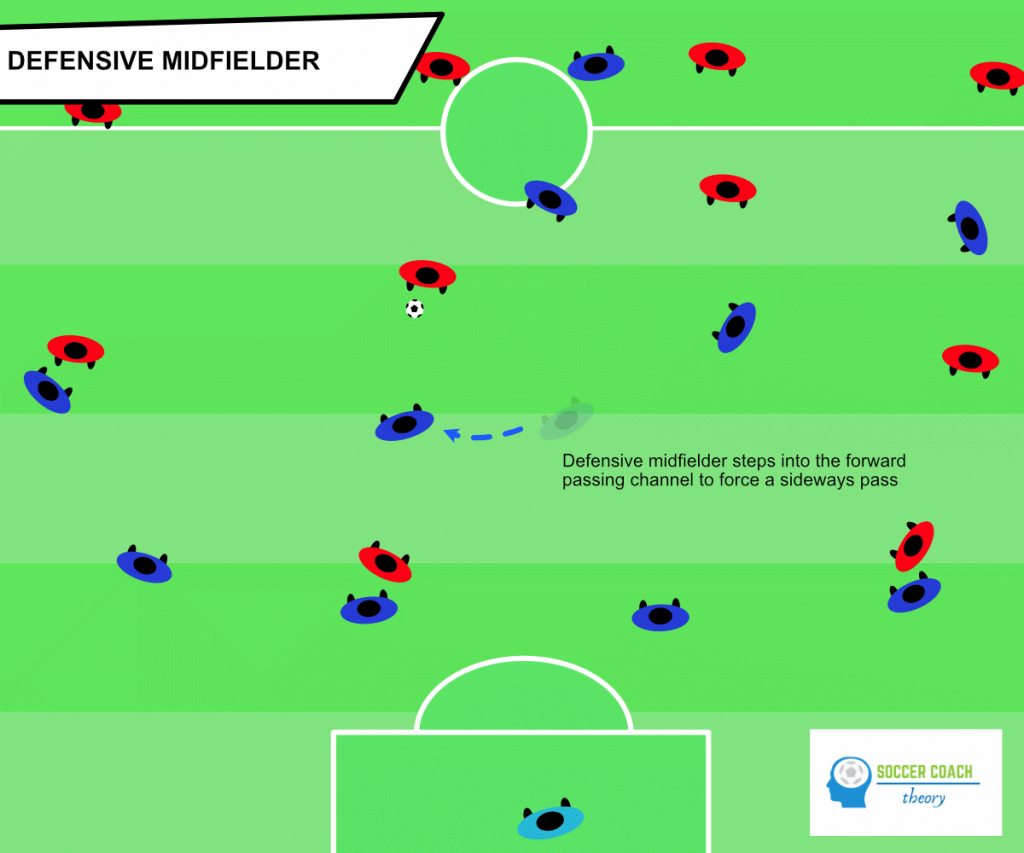 Quite often players who operate as DMs in successful teams are overshadowed by their goal-scoring counterparts, however they are very much appreciated by their teammates and coaches.

The best defensive midfielders can read the game well and see danger early, enabling them to spot when to take up certain positions, mark players, make tackles or gather lose balls. For this, a good understanding of the opposition players’ strengths and attacking patterns is useful.

Attacking responsibilities of a defensive midfielder

As mentioned, modern defensive midfielders are no longer one-dimensional defensive players. They are required to play a part in their team’s attacking moves. It’s quite rare that a DM will score or even assist a goal; however, they will often be involved in the earlier build-up play, feeding wingers, strikers or more advanced midfielders.

When their team have possession of the ball in defense, defensive midfielders will find pockets of space in deep midfield areas to receive the ball.

Their first thought should then be to play a forward pass whenever possible, therefore they should always have a ‘picture’ in their head when receiving passes. They should also try to receive the ball on the half turn so they can play forwards quickly (where possible). If the opposition is well organised and forward passes are not possible, simply keeping possession is important.

Below are some of the passing options a DM typically has throughout a game. They have been listed in a rough order of attacking impact:

1. Playing the ball in behind the defensive line

If there is an opportunity to play a long ball over the top of the defensive line or through channels for strikers or wingers to run on to, they should attempt this pass as it can directly set up a scoring opportunity. For this type of pass to be effective, there needs to be plenty of space in behind the defense and well-timed movement from the attacking players.

This type of pass if often called ‘breaking the lines’, as the ball usually cuts through the opposition ‘midfield line’, therefore taking their midfielders out of the game. This type of pass requires good vision and accurate passing, usually through tight channels.

This can be into attacking full backs or wingers and can often initiate an attack from wide areas. This type of pass is usually long ranging and therefore requires an ability to strike the ball with good technique over 30–40 yards.

Where some of the above more offensive passes are not an option, it is important that the defensive midfielders (or any player) keeps possession of the ball – so passing sideways or backwards to a defender shouldn’t be discouraged. If a team is patient in possession against well-organised opposition, simply moving the ball around the team at a good tempo will eventually create holes in the oppositions shape through moving their players around the pitch. When this happens, more offensive passing options will eventually materialize.

What formations include defensive midfielders?

Defensive midfielders are employed in all formations. In a 4-4-2, one of the two central midfielders will generally be tasked with taking up more defensive duties. In a three-man midfield, one player will operate in deeper midfield areas than the other two. In a 4-2-3-1, there may be two DM players that sit behind three more attacking players but there will be license for one of them to push forward when safe to do so (one DM will stay deep if the other pushes up field).

How is a defensive midfielder different from an attacking midfielder?

Quite simply, the difference is that, in attacking phases of play, the DM will maintain a deeper position behind the ball so not to leave big unoccupied spaces in the middle of the pitch for opponents to attack through if they win the ball. This positioning gives attacking midfielders the license to play further up the pitch and join in attacking moves, linking up with strikers and wingers.

When the team is out of possession and well organised, both the defensive and attacking midfielders will fulfill the same role: marking or pressing opposition midfielders, tackling and taking up sound defensive positions in front of their central defenders.

Every great attacking midfielder needs a defensively sound partner in the middle of the pitch, someone who will mop up behind them when attacks break down. Quite simply, they give attacking players the freedom to do what they do best – attack! Compiling a list of the best in the game isn’t easy but the best defensive midfielders usually stand out more in great attacking teams, so inevitably the players we’ve shortlisted have played in some formidable attacking outfits.

How has the defensive midfielder role changed?

Changes to rules in recent years designed to reduce the risk of injury have meant the game has become a little less physical. Slide tackles, or in fact any tackle where studs are showing, are now a thing of the past. As such, defensive midfielders are required to adopt a more refined way of tackling that requires greater timing and precision.

Tactics have evolved too which have seen many top teams become more fluid positionally. This particularly applies to the midfield area where players now regularly rotate, and interchange positions as oppose to staying in one rigid position for the entire match. Nowadays, at the top level at least it’s no longer sufficient for a defensive midfielder to just tackle and assert their physicality in the central area of the pitch, they have to be competent passers and have the ability to carry the ball forward and join in attacking moves.

What skills & qualities should a defensive midfielder have?

Many of the main attributes of the modern defensive midfielder have been covered already but here is a list of the basic requirements:

How to play defensive midfield in soccer: top tips

Tips for coaching a defensive midfielder in soccer

As discussed, there is a lot to the role of a defensive midfielder and lots of messages to get across to your players. However, it’s best to keep things as simple as possible and to not over complicate the game. Here are a few of our tips:

Errors a defensive midfielder could make

Soccer drills for a defensive midfielder