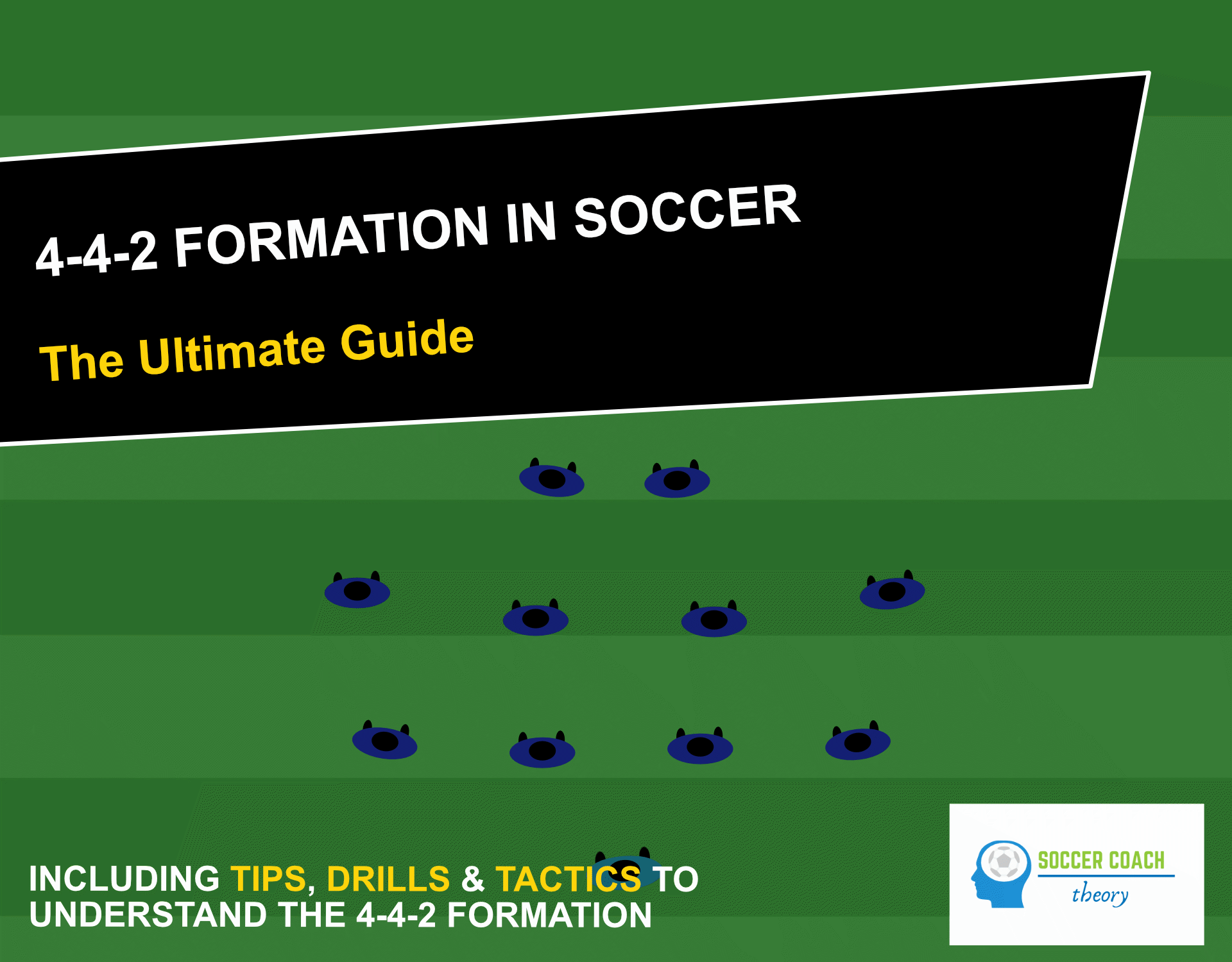 Synonymous with the game, the soccer 4-4-2 formation has been one of the dominant formations over the past 50 years. It has been used to great affect by some of the most successful soccer teams in the world in that time. Whilst the 4-4-2 soccer formation comes in different guises, in this article, we’ll focus on the ‘standard’ or ‘flat back’ 4-4-2. A this version of the 4-4-2 in soccer consists of:

The understanding between two central defenders in a flat back 4-4-2 formation can be the difference between a defensively solid team or one that has a disastrous ‘goals against’ record. Each player must constantly be aware of their partner’s position and actions. They must also keep a close eye on the striker they’re marking in each given moment.

For example, if a long ball is pumped up-field and one center back competes with an opposition striker in the air, their defensive partner needs to position themself a few yards behind. This allows them to cover the space behind, in case the ball is headed on by the striker or both players miss the ball (see image).

Central defenders also have the advantage of being able to see the entire field of play and therefore are expected to help organize their team into a good defensive shape when the team is out of possession.

The primary defensive job of a full back is to prevent crosses being conceded down their side and to mark wide attacking opponents when crosses are conceded from the other side. They also have to cover their neighboring center back when they leave gaps behind them.

Offensively, full backs are expected to join in attacks, support their wide midfielder and get crosses into the opposition penalty area. Therefore, the ability to repeatedly make long sprints throughout the length of matches is an important physical requirement.

Central midfielders in a 4-4-2

Although these two players operate in pretty much the same area of the pitch, one will usually be tasked with a defensive role while the other will have more of an attacking brief. If both players pushed forward during attacking moves, they would leave big gaps in the center of the pitch for the opposition to exploit. If they both play with too much caution then the strikers will likely become isolated.

Whilst both players are expected to compete physically and win possession of the ball where they can, the defensive midfielder must remain positionally disciplined so not to expose the team to counter attacks and to provide a platform for their midfield partner to join in attacks. The attacking partner can then push forward when the team has the ball to link up with strikers and arrive in the penalty area for crosses.

Wide midfielders or wingers in a 4-4-2

Differentiating these two positions comes down purely to the attributes a player possesses. Wingers are typically fast and skillful and like to dribble past defenders, whereas wide midfielders tend to cross the ball from deeper areas or be better passers (think Ryan Giggs vs David Beckham in their early days – flying winger vs technical specialist!). Both are required to provide assists from wide areas whilst adding to the team’s goal tally.

Defensively, they must support their full back and help defend against wide opposition attacks, then tuck in close to their neighboring midfielder when out of possession (see Defensive shape image).

The traditional 4-4-2 soccer formation uses two central strikers who usually offer the team’s greatest goal threat. Strikers come in many different molds. They can be fast and skillful and like to make runs in behind opposition defenses (the classic number 9); or they may be clever, physical players better suited to link up play (the classic number 10).

Regardless of the combination of style of the two, they are tasked with scoring and assisting goals and defending from the front. Often strike pairings play with one slightly deeper than the other to find pockets of space between opposition midfield and defensive lines. A great example of this was the Sheringham Shearer partnership for the England national team. Shearer would play high on the should of the last defender and run channels. Sheringham would drop off the defensive and find space to get on the ball.

Defending in a 4-2-2 soccer formation

In any formation, when a team is out of possession, they should form a narrow compact shape to reduce space between players and make it difficult for teams to break them down. In a 4-4-2, this means creating two narrow banks of four and sometimes having one striker drop deep, just in front of the midfield, leaving one striker up high as an outlet.

How high a team’s defensive line play or when and where they press the opposition depends on the tactics of the manager, but the 4-4-2 can be adapted to suit most tactical approaches.

In this formation, this involves full backs and wide midfielders pushing out wide (or at least on the same side of the pitch as the ball), strikers (or at least one) stretching pushing high to stretch the opposition defensive line and center backs dropping deep to create space for the midfielders and to provide a passing option should the ball need to be recycled.

Goal scoring opportunities can come from a many situations. A lot depends on the type of players in the team and how the opposition set up against you, but below are three attacking strategies a 4-4-2 team might use to attack:

Strengths of the 4-4-2 soccer formation

A flat 4-4-2 can be highly effective if implemented with the right players. Here’s a breakdown of some of the main strengths of this formation:

Weaknesses of the 4-4-2 soccer formation

As with any formation, you must first look carefully at the strengths and weaknesses you have in your squad. Here are some things to consider: