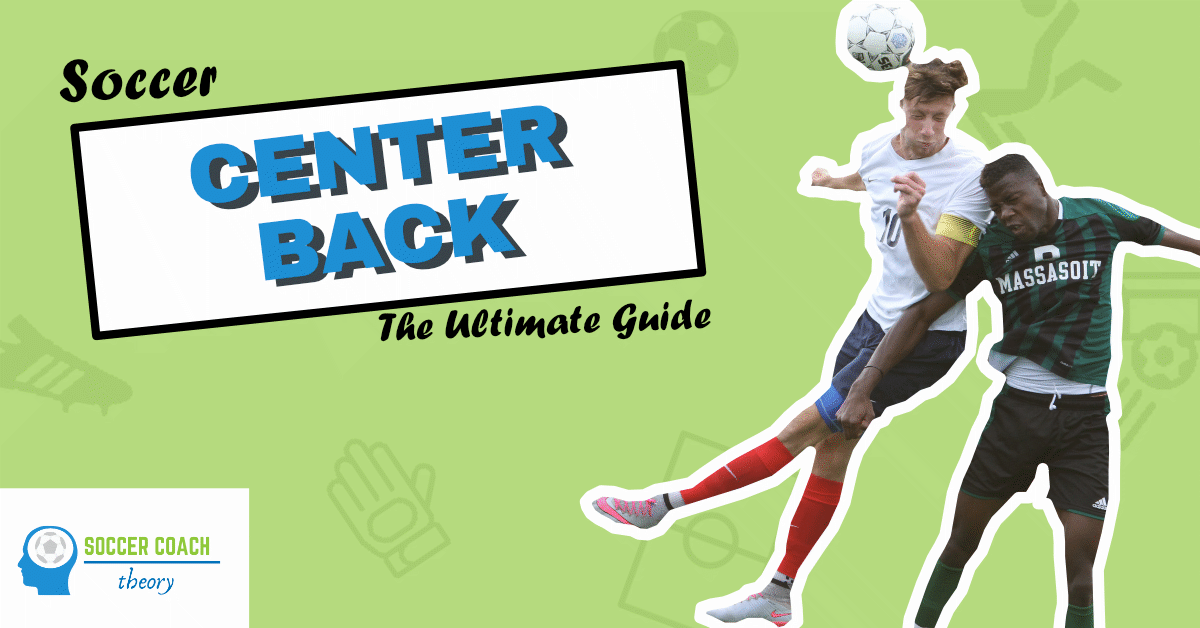 What is a center back in soccer?

In soccer, a center back (also know as a central defender) is the soccer player (or players) who have the main defensive role. A center back position is usually close to their own goal, in the center of the pitch. There are often 2 center backs in a soccer team, who must work together.

What is the role of a center back in soccer?

The main role of a central defender or a center back is to prevent the opposition creating goal-scoring opportunities and scoring goals  They are usually up against the opposition striker, and might mark one striker specifically.

They usually perform their role through effective marking of oppositions players, tackling opposition players when they have the ball, intercepting passes before the reach dangerous areas, and stopping crosses or dangerous balls that are played into attacking positions.

They also usually have a role in organizing the other defenders, as well as the defensive positions of the entire team. For example, they often organize the midfielders in front of them into a string defensive shape.

Defensive role of a center back in soccer

As mentioned, the main role of a central defender in soccer is defending. This means they will have multiple defensive responsibilities. These include:

Attacking role of a center back in soccer

What formations include a center back?

Every formation includes at least one central defender! And most formations include 2.

Formations that have a flat back 4 include 2 central defenders, flanked by a fullback on each side. These include:

There are some formations that have 3 defenders. In these scenarios, there is often one main central defender and 2 slightly wider defenders flanking them. These formations include:

Who are the best center backs in soccer

There have been a number of great central defenders throughout the history of soccer. Too many to name here. However, we’ve selected a few that we feel are worth highlighting:

Sergio Ramos: The captain of both real Madrid and the Spanish national team, Ramos is a hugely influential figure for any team he plays on. He’s won the World Cup, the European Championship, 4 Champions Leagues and 5 La Liga titles. He’s broken numerous records in the game, and is his country’s most capped player of all time. He’s also Spain’s tenth-highest goalscorer of all time. Strong, physical, wiley and technically gifted, Ramos really is the complete central defender.

Virgil van Dijk: Although he hasn’t had the illustrious career yet that Ramos has had, Virgil Van Dijk still stands out as one of the strongest center backs around today. His move to Liverpool in 2018 arguably transformed their team, maybe more so than the the attacking front 3. Strong, great in the air and calm on the ball, van Dijk is a great example of a modern center back.

Rio Ferdinand: Ferdinand was one of the first English defenders to really buck the trend of center backs. Instead of the typical aggressive hard-man center back, Rio came onto the scene with amazing pace, a huge amount of technical ability on the ball and a composure that would not look out of place for a playmaker in the number 10 role. His maturity for such a young soccer player also made him one of the great leaders and examples for people around the globe.

How has center back position changed over time?

The central defender position in soccer has evolved over the years. From the 1960s to the 1990s, central defenders would almost always be tall, rugged, strong players who used their physical prowess and might to overcome opposition strikers. They would often be the ‘hard man’ in the team, who liked nothing less than to rough up the opposition.

However, as the game of soccer became less physical and a lot faster from the late 90s onward, the role of the central defender had to adapt as well. Central defenders typically became less aggressive types, and had to match their attacking opponents for pace and agility.

In addition, with the improvements in soccer pitches and the evolution of the passing game through, central defenders now have to be far more technically proficient. They have to possess the short passing abilities of their midfield counterparts in order to retain possession for their team.

In another strange development, the central defenders are typically less likely to be the captain or leader on the pitch these days. While still needing to organize the defense and the whole team, the captain responsibility seems to have moved up the pitch to the central midfield or attacking players.

What makes a good center back?

In order to be an effective center back, a player must possess a range of skills and qualities. A few of them include:

Great reader of the game

First and foremost, the central defender must be able to read the game unfolding in front of them. This will allow them to position themselves effectively to intercept passes, block passing channels and be in the right place at the right time. It also allows them to organize their teammates around them to do the same and make their whole defensive unit more effective.

One of the most overlooked skills in any position on the soccer field is the skill of decision-making. And center backs must have it in abundance. it is linked to their ability to read the game, as a player who can read the game quickly can then make more effective decisions and solve problems. Decision making is especially important for a center back as a wrong decision could easily lead to the opposition scoring.

Timing for tackling and heading

Both heading and tackling are predominantly skills of timing. A center back must, therefore, have effective timing in order to perform the skills on the pitch against an opposition player. If headers are mis-timed, the center back runs the risk of getting caught under the ball, or not being able to properly direct the header. And a mis-timed tackle could lead to giving away a foul or letting an opposition player in for a goal-scoring opportunity.

A good center back will almost always be some form of leader on the pitch. Some are extremely loud and are constantly give their teammates vocal encouragement and support. Others are more strategic and provide great vocal information to allow their teammates to understand where they should be on the pitch and how they should be organized. The best do both and know when to do each.

Although technical ability may not be as important for a center back as it is for a central midfielder or more attacking player, center backs still need to be able to execute short passes well. Oftentimes, the center back gets a lot of the ball and will be expected to keep possession by passing to teammates around them. So, they need to be very competent short passers of the ball.

How to play center back in soccer: top tips

Adapt based on your opposition

Try to quickly figure out the striker you are playing against. You will have to adapt your game depending on the type of striker you are marking so be prepared for this. For example, if you are up against a quick striker, it may be best to get tight to them and stop them turning and running at you. If you are against a deep-lying forward, you may need to talk to your defensive midfielder and have them do the marking while you stay spare.

The partnership with your other central defender is hugely important. You should try and make decisions before the game about who is marking which striker, which of you is going to try and win the ball, which of you is more likely to sweep around the back, and which is going to call offside.

Be vocal on the pitch

While you don’t have to be constantly shouting, be able to give good information to your teammates can help them be much more effective at their defensive role. Things like telling them where they should be standing, who they should be marking, and what you expect them to do next time if they make a mistake can go a long way to improving their game as well as the whole team.

Tuck fullbacks in when defending

Usually, creating a tight back four with the fullbacks a little closer to the center backs is a great way to set-up a compact defense, especially if you are under a lot of attacking pressure. But, you need to make sure that the fullbacks are still able to quickly engage opposition wingers or wide strikers when they get the ball.

During set pieces where you are defending, such as throw-ins, free kicks, corners, always try and keep one center back as the spare man (not marking anyone). These moments usually allow you time to organize defensively and get your team marking opposition players, so use it to free up a center back, who can then either attack the ball, or pick up the second ball, if it’s knocked on.

A slide tackle should be a last-ditch tackle, not a regular occurrence. As a center back, you definitely shouldn’t be going to ground for a slide tackle up in the middle of the pitch. If you’re on the ground and your opponent has got round you, you’re going to be out of position long enough for them to exploit the space you left.

It should be very rare that a center back needs to make an aimless clearance (heading or kicking). Most of the time, a center back should be aiming to find a teammate with their ‘clearance’. This includes your headers – you should be directing your defensive headers to one of your teammates instead of just heading it forward.

How to be a better soccer center back

As with all other soccer positions, getting better takes a lot of practice, dedication and time. A great tip is to watch other great defenders and try to understand their decision making: why did they do what they did at that time.

Finally, you need to put yourself into lots of different defensive scenarios in order to practice defending. So, you should try and set-up a few different types of drills and play different forms of soccer regularly.

Tips for coaching a center back in soccer

As a coach, you should be giving your center backs lots of encouragement when they make a good decision. This positive feedback should be based on their decision making, not on the outcome of their decision. For example, if a center back goes to ground to prevent a low cross from reaching a striker at the back post, but they turn the ball into their own net for an own goal, they should be praised for making the right call. They needed to try and intercept the cross, otherwise the striker would score. And, next time, they should probably try and do the same again.

You should also encourage them to get on the ball when your team are in possession early in a game. this can help build their confidence at passing and keeping possession.

You should also give them some information, but not always the right answer. For example, instead of shouting “the opposition striker is behind you” you should shout “where’s the striker?”. This helps them get into the habit of checking for themselves where the striker is. Sure, it might take them a split second longer this time but it will help them build the right habits in the future and they’ll be less reliant on you telling them all the answers.