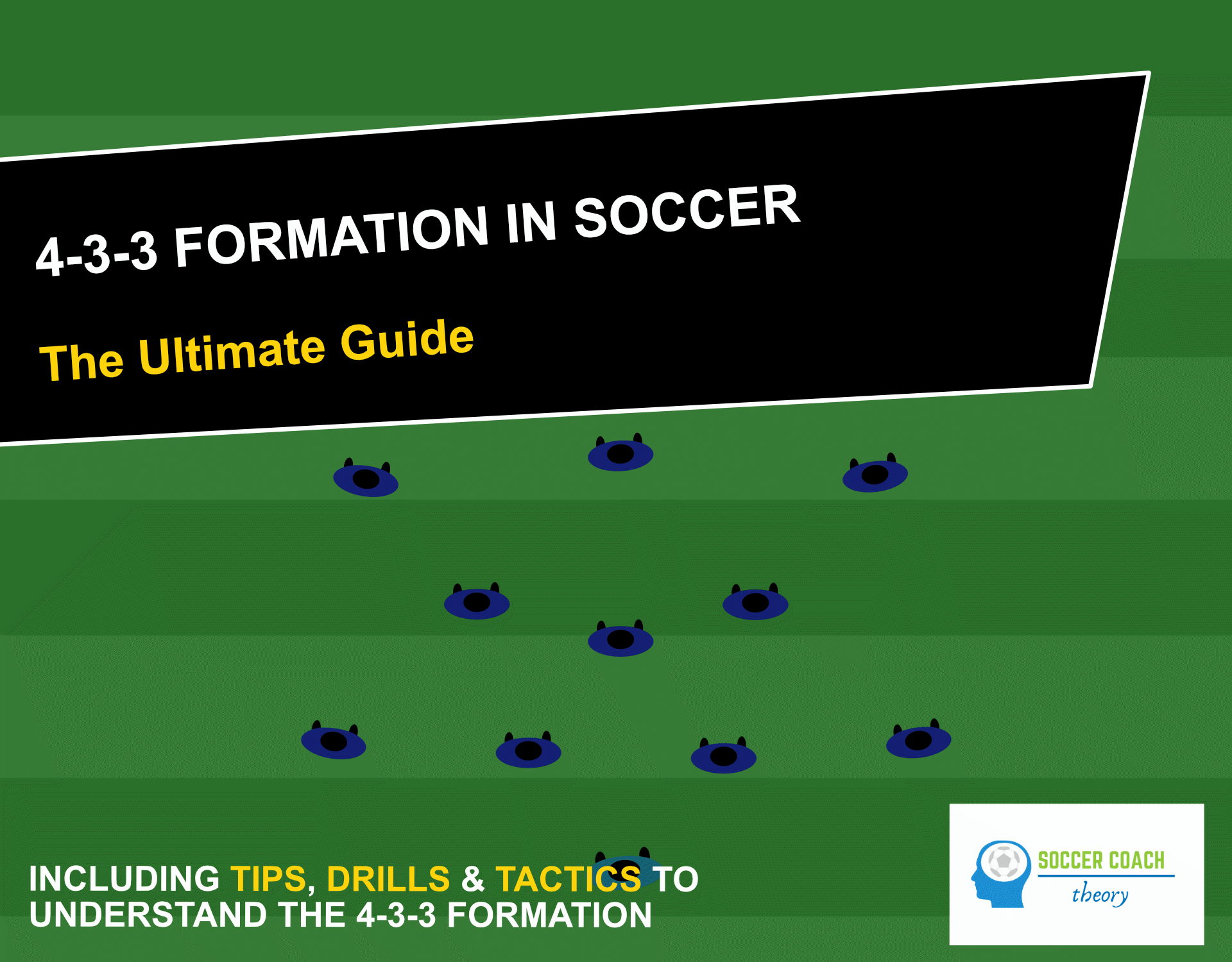 The 4-3-3 has been around for many years but it has enjoyed a rise in popularity over the last 10 to 15 years and is now probably the most used formation at the top level of the game. As with most formations, the 4-3-3 is versatile and can be used differently to suit the personnel or philosophy of a team.

Generally, it consists of a traditional back four made up of two central defenders and two full backs. Then a narrow midfield three who tend to form more of a triangle shape and in attack one central striker who is flanked by two wide strikers. 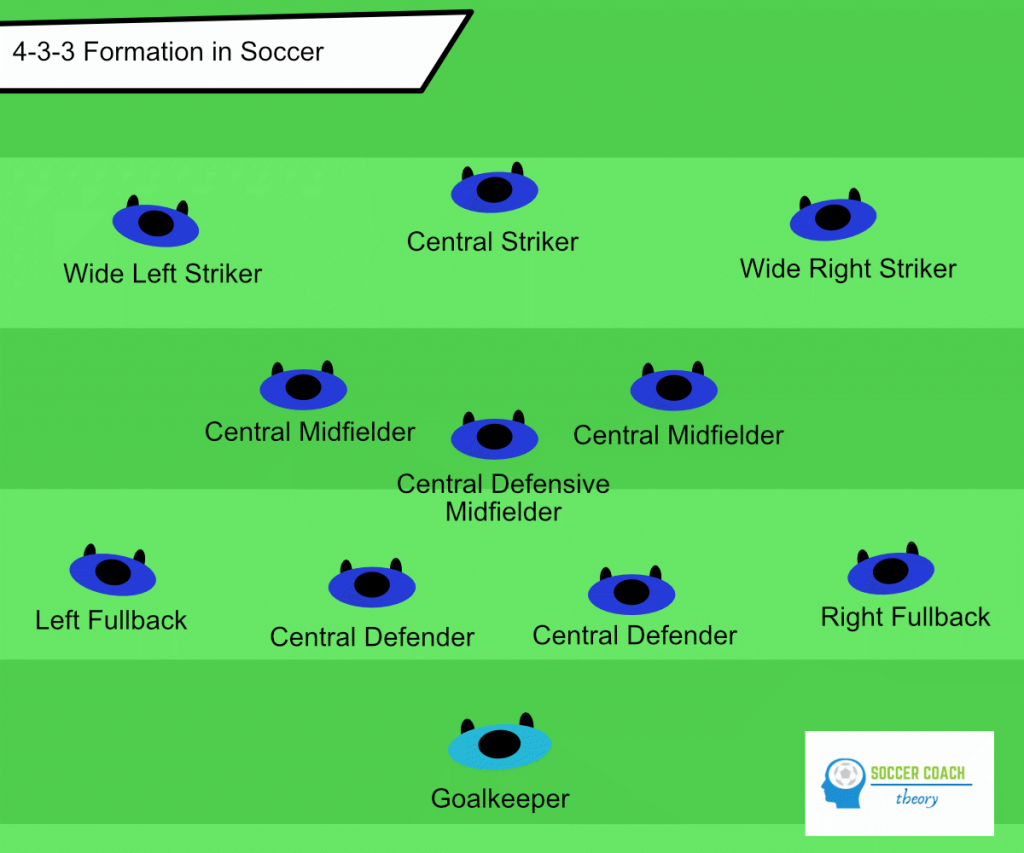 There’s no real difference in how center backs in a 4-3-3 operate than any other formation that uses a regular back four. How high a back four defend as a line depends on the approach favored by the coach, not the formation itself. One slight difference is their distribution, with most teams looking to get the ball into their central midfield players rather than longer passes to the attackers that bypass the midfield area.

Again, as with center backs, a full backs defensive role doesn’t alter much in a 4-3-3 but as there are no wide midfielders in this formation, they are expected to push forward at every opportunity to provide width for their team. As such this role has evolved in recent years with full backs now needing greater engines than generations gone by who had wingers in front of them to offer the wide attacking option. These days full backs constantly maraud up and down the wing, covering an incredible amount of ground to support in both attack and defense.

A central midfield three can accommodate different blends and styles of midfielder. In general though, one will be more defense minded and play a little deeper than the other two who have more of a license to get forward and join in attacking moves. Offensively, having three midfield players allows teams to dominate possession and push players forward to support the front three.

Players who occupy these positions are often similar in armory to traditional wingers but are pushed further forward when the team are in organised possession. These players don’t just stay out wide but will carry the ball or make runs into more central areas, particularly in the final third. This is to create chances, link with the central striker or make runs in behind the opposition defense. Defensively, they’re expected to track back to support their full backs and form part of their teams defensive block when the opposition has possession of the ball. Much like full backs, wide attackers don’t stop running!

The lone striker in a 4-3-3 usually has some degree of physicality and can hold the ball up and bring others into the game. As well as carrying a goal threat themselves they need to create chances for others too, so clever players with vision and awareness fill this role effectively. The role requires a good work ethic as they’re often needed to do a lot of pressing off the ball.

Defending in a 4-3-3 soccer formation

As mentioned before, teams can use entirely different tactics when using a 4-3-3. Some teams prefer to defend high up the pitch. This involves squeezing the defensive line up high to compact the middle of the pitch and using the front players and midfielders to press the opposition as close to their own goal as possible. When executed successfully, this approach helps teams win possession in more offensive positions and prevent opposing teams from settling on the ball. Generally, teams who press high up the pitch also like to dominate possession of the ball, particularly in midfield. 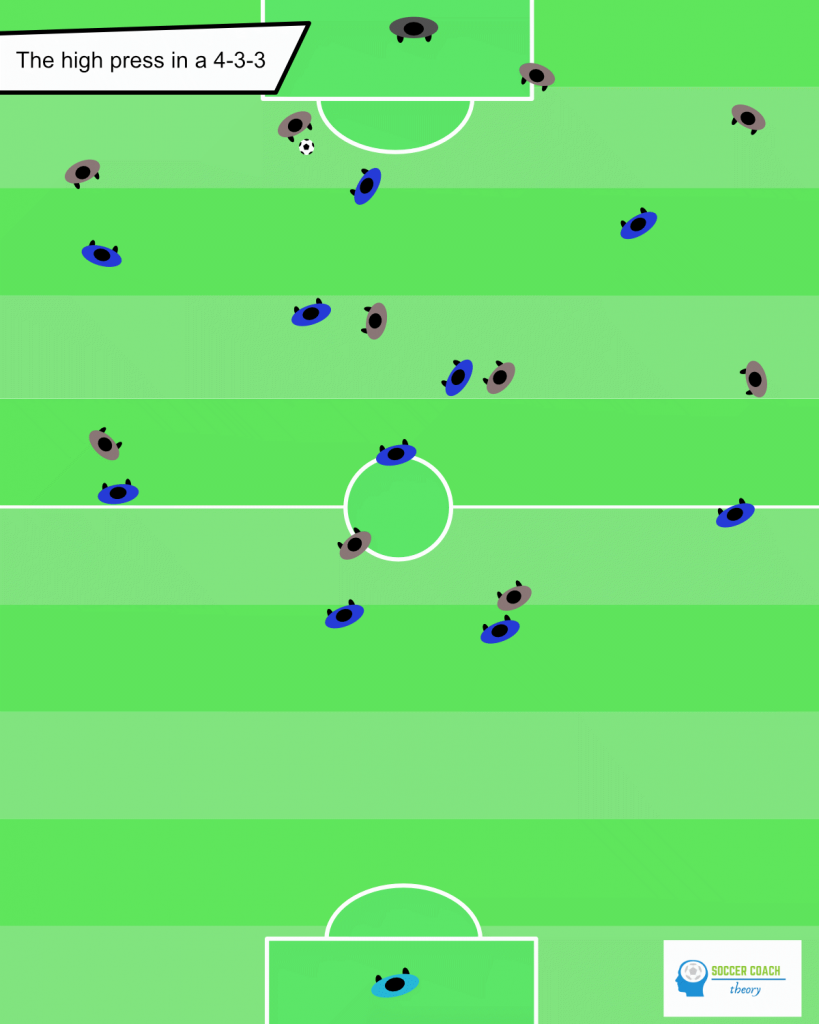 The 4-3-3 can however, be used by teams who prefer to drop back and allow opponents to have possession of the ball, especially in their own half. These teams adopt a 4-5-1 when they’re out of possession, forming two narrow ‘blocks’ across the pitch, making themselves difficult to break down. This may mean sacrificing possession of the ball for long periods of the game but it allows them to spring quick counter attacks from deeper areas. Naturally, this style of play tends to suit teams who have significant pace in wide areas or a fast central striker who likes to make runs in behind opposition defenses. 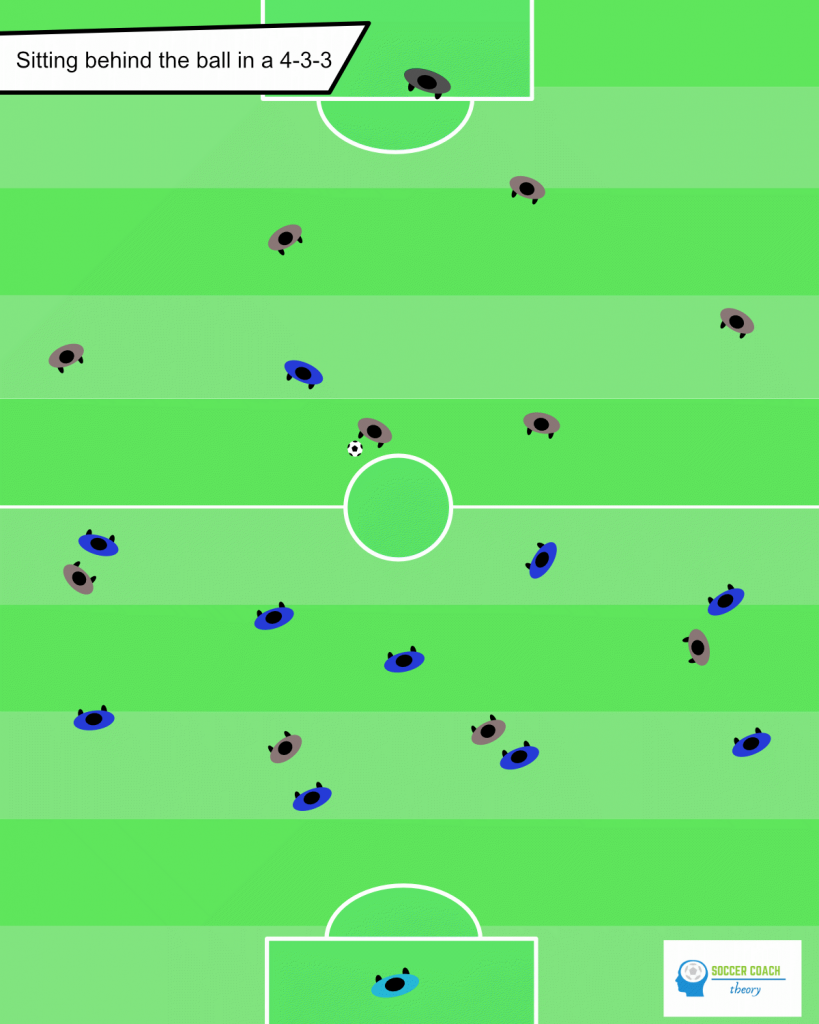 Not every 4-3-3 team fits perfectly into one of the above categories though. Some teams are somewhere in the middle and chose to conserve energy and press the opposition when they have possession in the middle of the pitch. It’s also worth pointing out that teams may change their tactics whilst remaining in a 4-3-3 depending on their opponents, game importance or enforced changes to personnel due to injury or suspension. Formations just provide a basic positional structure for a team but there are many ways to play within that structure!

Attacking in the soccer 4-3-3 formation

How a team defends has a large bearing on how they attack. If a team sits back in a 4-5-1 without the ball and defends deep against a more possession-based team, then naturally their attacking threat is likely to come in the form of counter attacks from deep. Whereas a team who play a high line and press high up the pitch will win possession in their opponent’s half, counter attacking from advanced areas.

There are, however offensive benefits to the formation in general. Full backs who are encouraged to push forward can create goal scoring opportunities from crosses and cutbacks. Wide attackers, especially those with pace can cause havoc in opposition defenses by dribbling past defenders, crossing, cutting inside to shoot or making runs in behind opposition defensive lines. The lone striker will generally operate centrally. This means they’re usually well placed in the penalty area when crosses are delivered or passes from wide or central midfield positions are fed through to them. Attack minded midfielders can carry a big threat as at least one of the three normally has license to roam forward, play closer to the striker and arrive in the penalty area for crosses.

Strengths of the 4-3-3 soccer formation

If coached well, there are many strengths of the 4-3-3. Here are some of the formations most obvious characteristics:

Weaknesses of the 4-3-3 formation

If you’re thinking about using a 4-3-3 for your team, it’s worth considering first whether or not your squad has players who will fit the formation well. Some key questions to ask are: