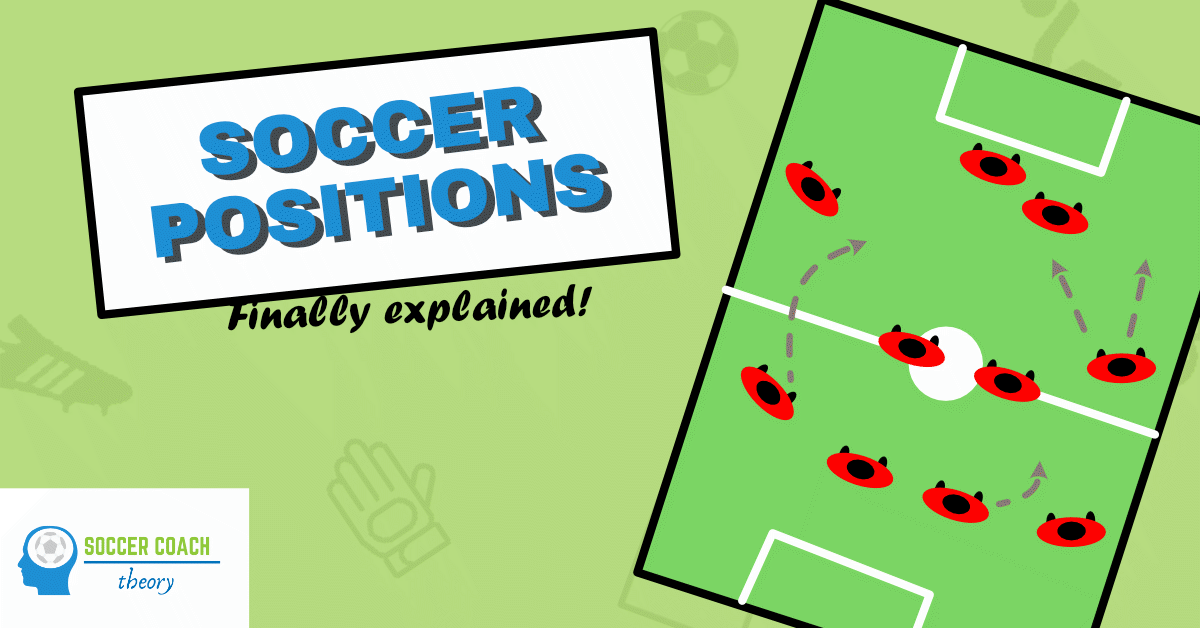 What are soccer positions?

The positions in a soccer game generally describe the place on a soccer pitch where a soccer player should be (for most of the time).

While the game of soccer is fluid and dynamic, and players cover lots of ground during a soccer match, their positions usually dictate where they spend most of their time, as well as dictating what their main job for the team is.

Although there are 11 players on a soccer team, there could be many more positions. But not all of the positions will be used by every team.

Why have soccer positions and roles?

Soccer positions are needed in order to give some structure to a soccer team. Having positions in soccer also gives some discipline to players to allow them to focus on certain jobs and roles on the pitch.

If you’ve ever seen a large group of very young kids playing soccer, you’ve probably seen them all swarm around the ball. Having positions in soccer stops this from happening.

Does youth soccer have positions?

Generally, youth soccer teams have fewer players. Therefore, they also have fewer positions. In addition, young soccer players are encouraged to play in lots of different positions while they are learning the sport.

This allows them to practice all the different skills needed on a soccer field. It also gives them an opportunity to experience different positions to find out which they enjoy the most.

Here is a typical soccer positions diagram, with positions in a soccer game placed on a pitch:

In a professional soccer team, any player in any position can have any number on their shirt. The numbers on the shirts are usually distributed at the beginning of the season across the entire squad.

However, at other levels of the game, there is often some consistency with certain positions on the pitch wearing certain numbers. This has evolved over time, but, in a standard 4-4-2 formation, the numbers are usually distributed as follows:

What are the positions in soccer?

As mentioned, there are lots and lots of different positions in soccer. Positions are usually dictated based on the formation and the system that a team plays. For example, in a diamond 4-4-2 formation, there will be one Defensive Midfielder and one Attacking midfielder. However, in a flat 4-4-2 formation, there is likely to be 2 more conservative central midfielders.

As such, below are some of the more common soccer positions broken down into these 3 categories:

Goalkeeper: The goalkeeper usually stays within, or very close to, the 18-yard box Their primary job is to stop goals being scored, using their hands. They can also, where needed, provide support for the central defenders in possession of the ball.

Sweeper: This is usually a deep-lying central defender who plays close to their own goal, especially when the opposition are attacking. Their main job is to ‘sweep up’ behind the defense and also start the attacks when their team has possession of the ball. We’ve written an in-depth analysis of the sweeper in soccer.

Central Defender: These usually stay in their own half of the pitch, usually quite close to their own goal in the middle of the pitch. Their main job is to stop opposition attackers from scoring and to win the ball back. Check out our in-depth article on a soccer center back.

Left/Right Fullback: The fullback in soccer is the wide defensive position. Their main job is to defend from wide positions, usually stopping opposition wingers from getting crosses into the box. In the modern era they also have a job when attacking, in supporting the wide midfielders or wingers.

Left/Right Wingback: These are also wide defensive positions, however, they are typically also the main wide attacking threat for a team. So they need to be extremely fit to cover the entire length of the pitch.

Holding/Defensive Midfielder: The Defensive Midfielder in soccer is a central midfield position responsible mainly for intercepting opposition passes and breaking up opposition play before it gets into dangerous areas of the pitch. They also need to be competent at passing to keep the ball when their team are in possession.

Central Midfielder: This is a more traditional central midfield position who does a complete job of defending and attacking. Their main role is to start attacking plays, and make passess to the wingers or strikers and help them create attacking opportunities.

Box-to-Box Midfielder: This describes a central midfielder who covers both the defensive midfield role, and the attacking midfielder role. As the name suggests, they are typically extremely fit and are able to cover the length of the pitch from their own 18-yard box to the opposition’s.

Attacking Midfielder: this position is a central midfield position who has attacking responsibilities. They would usually be expected to assist goals, as well as score their fair share of goals.

Left & Right Midfielders/Winger: These are the wide midfielders who usually offer a substantial attacking threat. Often they will play dangerous passes and crosses from out wide into central areas for the strikers to attack. Our ultimate guide to wingers in soccer provides an in-depth analysis of wingers in soccer.

Number 10 or Forward: This is usually a deep-lying forward or striker who links up with a more traditional striker. Although a goal threat, the number 10 will not usually play on the last defender, like a striker may

False 9: the fals 9 is a relatively recent invention, and describes a lone striker who plays very deep, rarely engaging oppositions central defenders. This position is usually included in teams where possession is the name of the game, as this player will drop deep and link up with their midfield to keep the ball and attempt to create space and opportunities to score through passing their way passed opposition defenders.

Striker: this is usually the most potent attacking threat for any team. The striker (or number 9) is usually the player who plays furthest forward, closest to the opposition goal, often on the shoulder of the last defender.

Wide striker: these are stickers who play in wide positions. They typically exist in 4-3-3 formations and can be distinguished from wingers as they usually like to come into central areas further up the field and are more of a goal threat themselves, as well as creating opportunities for teammates.

What soccer position should you play?

The soccer position you should play depends on a number of things. Firstly, if you are still a young soccer player, you should experience as many soccer positions as possible. This will give you valuable experience that will bear fruit for you later in your soccer career.

For example, if you play as a central defender for a number of games, or even a whole season, you will start to understand the types of things that central defenders don’t like. Thus, if you then move to play as a striker, you will have valuable information about how to adapt your game to make it difficult for the opposition central defender.

You should also consider the technical abilities you possess. Certain positions in soccer demand different technical abilities. For example, an attacking midfielder or striker would need to be better at shooting than a central defender. So, if you are very good at shooting and finishing, you could probably be more effective for your team in one of these attacking positions.

You should also consider your physical abilities and size. For example, a quicker, more agile player may be better placed on the wing, and a more direct, stringer player, might be better placed in central midfield or defence.

Lastly, you should consider what your dominant foot is. Typically, if you have a stronger right foot than left, you will be more effective placed on the right side of the field. At the top level, some players are bucking this trend and tend to allow themselves to come in off the wing onto their more dominant foot on the inside. However, at youth and amateur levels, sticking to the side of the field where your stronger foot is usually world well. Of course, you should always practice to improve your weaker foot wherever you can!

A coach’s decision making will depend largely on the age group that they coach. For example, the main outcomes of coaching youth soccer is to allow the development of players. Not to win.

So, a youth soccer coach may be far more experimental with the positions they use and the players for each position. They will probably try more players in lots of different positions. They should also consider how a player can improve, and thus employ them in a position that will help them get better as a player.

This may often mean the team, as a whole, does not perform as optimally as it could. But, in the long term, the development of the players is improved, and they become more resilient, multi-dimensional footballers.

What is the hardest position in soccer?

What is the easiest position in soccer?

Firstly, there are no easy positions in soccer. However, some positions are a little easier to play for some people. We believe that the easiest position to play in soccer is a fullback (or wide defender). This is because they will rarely be considered at fault for the oppositions scoring (as a central defender might be). And, although they should support attacking play, they are never going to be looked at as a problem if a team is not scoring goals.

It’s important to note that positions are merely the starting point for players on a soccer pitch. A match of soccer is dynamic, fluid and ever-changing. Therefore, players get pulled all over the pitch and it’s not uncommon to see players wildly out of position on the pitch.

Moreover, as the game of soccer develops over long periods of time, new positions come to the fore and become more popular, and others fall out of favour. For example, the sweeper is rarely seen in modern soccer, whereas some big teams of the early 90s built their teams around a sweeper. Equally, the wide striker is commonplace in a modern soccer team, but would have been hard to find in the 90s.

So, there are a large number of soccer positions and different teams use different positions. And different players can also play in multiple positions. So, the picture is not as clear as it may first seem, but we hope we’ve helped make the waters look less muddy!